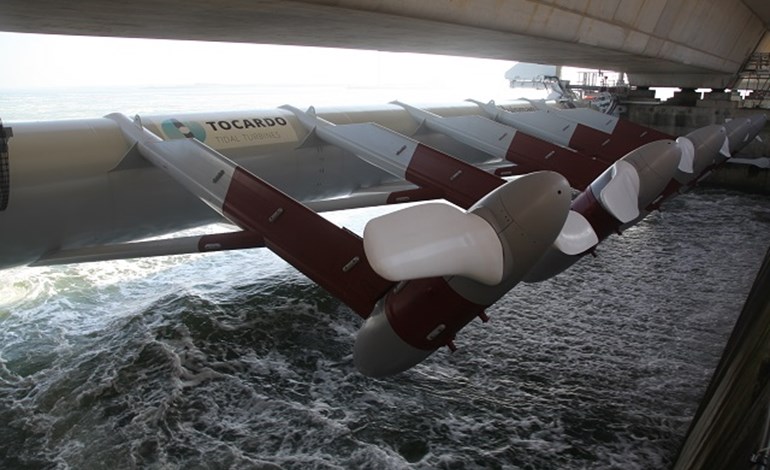 A leading UK tidal energy expert has urged the Government to give the tidal sector dramatically more financial support in order to improve the resilience of the country’s clean energy systems.

Jeremy Smith of QED Naval says the sector is up to the challenge and more must be done to properly use tidal power and allow the sector to compete with other forms of renewable energy, such as wind, and boost the UK’s energy security.

Last week the UK Government stepped up its commitment to clean home-grown energy, awarding multiple contracts (totalling £395 million) for onshore wind, offshore wind, solar, tidal energy and other forms of renewable energy in the biggest contract auction ever. It is the first time tidal power projects (which received £20 million) have won contracts through the Government’s competitive auction process.

Jeremy Smith says: “The Government has certainly shown its confidence in the sector which is a huge milestone in itself, but now we need a long-term financial commitment that will allow the sector to compete commercially and offer a solution that is not only reliable and sustainable, but also more economically beneficial for the UK’s supply chain.

“As an island nation, the UK’s tides could provide 12 per cent of the country’s electricity demand. Tidal energy therefore has an exceptionally important part to play in the renewable energy mix since it is the only form of renewable energy that is predictable – it has four peak power periods during the day, every day, 365 days a year, guaranteed. It doesn’t rely on weather conditions either. It is abundant and this capacity, coupled with its reliability, could provide a baseload replacing gas generation and securing energy supplies.”

QED has plans to disrupt the sector with its patented Subhub tidal platform – an environmentally friendly submersible foundation designed to support the commissioning, testing, transportation and installation of tidal turbines to the seabed. QED’s platform could cut costs of deploying and maintaining turbines by 60% and improve yields by up to 48%.

The Edinburgh-based renewables specialist is embarking on a new fund-raising round through Seedrs to support the company to develop their tidal turbine technology to an industrial scale as offers arrive to expand its operations to England, Wales and Canada.

The company was founded by Jeremy Smith, a Naval Architect with 20 years’ experience within the defence research and marine industry, working on nuclear submarines, composite propulsion systems and the Queen Elizabeth Class Aircraft Carriers project.

Smith adds: “The UK is a world leader in tidal energy technology, with five of the top 10 tidal companies headquartered in Scotland. In the UK alone we have 50% of EU’s tidal energy potential, but it’s a global market. We want to build a new industry for Scotland, and the UK, which can then be exported globally, much like the wind industry now in Denmark and Germany. We’re excited for what our new funding round could help us achieve for future energy systems, in the UK and globally.”

The UK is the second largest tidal market in the world after Canada and QED’s Chief Commercial Officer, Keith Murray, has recently returned from Nova Scotia where he met leading politicians and tidal technology experts. He joined QED in 2020 to help commercialise the Subhub tidal platform and was responsible for a JV partnership and the acquisition of Tocardo.

Murray says: “The Canadians are very excited about our technology and we are planning to set up a legal entity there to assist in the commercialisation of our products.

“We have recently established a base in Pembroke Dock, South West Wales. This builds on QED’s long-term strategy of establishing supply chain links and developing tidal farms in Wales. The Welsh Government is particularly supportive of renewables in securing GVA and jobs for the country.

“We are also operational in England with our EU Interreg TIGER project and tidal test site located on the Isle of Wight. We are looking to expand our reach in England after receiving interest in using our Subhub platform and Tocardo tidal turbines at the Perpetuus Tidal Energy Centre (PTEC) off the South Coast of the Isle of Wight.”

Smith adds: “Tidal energy has been long been treated as a younger player within renewable energy, but it is integral to building a robust system that offers security of supply that we need.

“The UK’s baseload is currently provided by gas, and wind will never be able to replace that as it is too unpredictable and produces gaps in the national grid. Wind is currently underdelivering so we need to design an energy system that offers security of supply, and the reliable nature of tidal has the potential to compliment wind power and make up for unpredictable domestic supply deficits when they occur.

“The latest revenue support from the UK Government means that tidal energy can take its rightful place in the UK’s mainstream electricity supply – but for progress to be sustained it requires a clear policy framework with continued ringfenced allowances. With a global tidal energy market of £76 billion, and a predicted GVA of £1.4bl by 2030, supporting some 4000 jobs, the UK has the chance to truly become the frontrunner of the ocean energy market globally.”